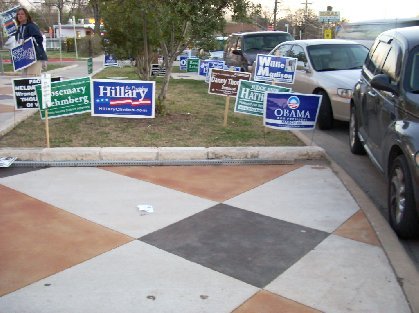 i went down the street to the caucus. 😉 man, that’s cool to write. so ok, i went down the street to the caucus and had to get a slice of pizza because i didnt know how long it would be, this caucus. never been to a caucus before. across the street from the pizza place, cars were gathering and driving slowly up the street looking for parking spots. there was a man holding up a sign which i didnt read because i could hear him just fine. he was shouting: the time has come! the time for barack is now! over and over. it was nice. he didnt look at me; he assumed i was on the other side: i was a white woman, he a black man. inside there were a number of older black folks who needed to have chairs for the wait. there was a young white mom with a year-old on her back. why am i mentioning colors? and ages? ’cause thats what was there, at the caucus. i cant tell you how nice it was to be in such a mix of neighborhood: the older, delicate folks, man! now they know how to vote 😉 the rep came in and announced to the very calm but at the end of a workday crowd that he’d been rep for 5 years and never seen a turnout like this. apparently the line just for the caucus not the vote, now snaked around the corner. they were guestimating about 500 people or so. all i can tell you, world-europe, asia, everywhere- if you think americans are made of one thing, that our officials represent us completely, you are a-fooled. just like if i said all germans are nazis, every white south african racist, and all one kind only for it’s “own”, ridiculous. i showed people the same lines, where to write down first and last names, and street address and zip, and that long number thing, certification #, and candidate. i showed those same lines to older black women and men, young hispanic women with their moms, white middle aged men, young guys black, white, asian hispanic, and white women. in fact, the person who handed me a leaflet when i arrived for hillary (dont forget to vote for hillary, he said) was a young black man. they all forgave me what i was, same as i did them. ifyouknowwhatimean. i had stood in line while waiting to write down my name and cast my second vote and then roped myself into the empty chair next to a wild-eyed woman who looked panicked at her solo gig at the only hillary table in the room. there was a young black girl who put her hands to her face and said quietly, just dont crucify me, as she looked over at the enormous crowd of obama supporters. dont be silly, i told her, you are a voter. but we all knew how she felt. pariah is how, like when you do anything without the populace on your side. like voting for hillary clinton in that room tonight. in fact, what i mainly felt was: happy to be in the endless bosom of endless family of human beings. thats right, i said bosom. urgent just to be counted and happy just to be there. afterwards the crowd moved outside to wait for the delegate nominations, and me and wild-eyes stayed inside to count up our table’s votes. i left after that, but the feeling was high, and the tv was reporting in increments while the counties were phoning in. have you read sleep of prisoners by christopher fry? there’s a quote i kept thinking of: “thank god our time is now!” actually it goes like this: “dark and cold we may be,
but this is no winter now.
the frozen misery of centuries
breaks, cracks, begins to move;
the thunder is the thunder of the floes,
the thaw, the flood, the upstart Spring.
thank god our time is now
when wrong comes up to face us everywhere,
never to leave us till we take
the longest stride of soul men ever took.
affairs are now soul size.
the enterprise is
exploration into god.
where are you making for?
it takes so many years to wake,
but will you wake, for pity’s sake?“ tonight i was proud of this country. im not a nationalist, or a party affiliate, or really any kind of ist at all. i dont like the coercion of freedoms, subtle or not, and most of all, i dont like the cynical manipulation of human feelings to rouse or cause people to act in what they think is freedom until the feeling subsides and whats left is confusion and a feeling of being manipulated. i dont like that. like the goddamned war that weve all just lived through, even if we never were in iraq. any war, or most. shep of course would disapprove: um, hello? oh, hey shep. i see youre speaking in italics now too. jenn. this is serious. you have completely lost your sense of humor. oh i know. i have. its gone. thats your fault. come again? really. ever since you died nothings funny anymore and i dont know how to laugh. ?? oh whatever snoopy. ??! ok, scooby-doo. better. look, i dont care what you do, but get a sense of humor. you look awful. so serious. look. dont you die and then think you can walk back in and criticize me and steal my whole italics thing. its your damn fault anyway! why did you do it? dont you see whats happened? everythings a fucking mess, and its your fault. look. im sorry. i didnt mean to die i just did. and now you have to figure it out. PLEASE youre scaring me. and, jenn? BOR-ing. shep, just shut up. shut up. i dont care. come with me. come here, step outside. but- come on. o god. [brb]